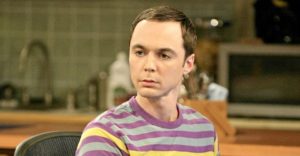 I’m NOT a dummy

I remember my first YUEN Method® class many years ago in Toronto – and also attending Dr. Kam’s usual “night before” free seminar preview of the training.

The audience of maybe 80-100 varied in age from what I could tell.

One lanky, bearded guy in the audience caught my attention    He looked well educated, maybe 35yrs old.   By his dress, I was fairly certain he was an engin-nerd type.

(strangely, your humble author and even Dr. YUEN have backgrounds that includes being an engin-nerd)

Sheldon was clearly skeptical.   Why?    Well, Sheldon thinks he understands quantum physics – how things really work.  He holds the common materialist view most highly educated people hold – without actually admitting they have that (a) “belief” system.

Perhaps someone familiar with YUEN Method® told Sheldon about Dr. Kam – and he came to the free, night-before presentation to get material to debunk the Method to his “believer” friend.

After Dr. Kams’ demonstration / presentation, I sat near Sheldon in the small hotel lobby –  looking at my notes – and overheard him on his cell phone.

Sheldon had dogmatically rejected what others experienced – and even what he saw with his own eyes.  Perhaps what Sheldon saw didn’t fit into a neat mathematical model or box – or reaffirm some “settled science” in this beliefs or of other physicists in his narrow “echo chamber” academic circles.

Sheldon was a textbook skeptic … and partly a cynic.

Sheldon would probably consider himself extremely open – when it comes to questioning everyone else’s beliefs – and especially others’ experiences… but he holds his own belief system sacred and unchanging (as correct).    He simply won’t question his own dogmatic beliefs – or even admit he also has them
… long enough to posit “how is that/this physically possible?”.

As I can feel his energy now – from that time long ago – he saw our Dr. Kam – a man with mastery of this SIMPLE method (strong/weak) as some kind of charlatan –  a side-show snake-oil salesman.

Sheldon was only there to debunk – to confirm his own beliefs – and gather fuel to free others’ woo-woo minds from the “scam”.    He could brag to his Ph.D colleagues “I went to another fortune teller last night, what a phony”.   The herd wins again.

Like so many highly educated people, Sheldon was looking for something MORE COMPLICATED than what he could understand – as a measure of truth, usefulness or value.

When the concept was SIMPLE (and worked), his openness – what little he had – evaporated – in his uneasiness of being confused by what he saw.   Educated people often won’t explore anything that confuses them.    And, instead of introspection / questioning his own beliefs/education (“hmm… this isn’t what we are taught”), it triggered zealot mode in him – defending his education, “settled” science – more-or-less.. vs having a direct, and measurable experience (he didn’t go on stage to experience it)

The energetic weakness that applies here would be “the learning anchor” or “the academic mindset” (both “holding on” effects).

“Today’s scientists have substituted mathematics for experiments, and they wander off through equation after equation, and eventually build a structure which has no relation to reality.”
— Nikola Tesla

Sheldons’ familiar story repeats –  especially with other modalities in the energy work or body work fields.     If the modality they’re familiar with is COMPLICATED and SLOW, and took much time / effort to LEARN – they can’t let go – and accept the simplicity or immediacy of YUEN Method®.

And, it’s their loss.

It’s best not to debate – or grieve for – or spend 1 second trying to convince the Sheldon Coopers – or give them more attention than they deserve.   As free people, we all make our own choices.  There are ~7.2 Billion people on planet earth – and only so many hours in a day to spread the simple truths we uncover in what we call YUEN Method®.

Sheldon:  “My back hurts – it must be coming from my back”..
Me: Yeah, I’d go with that Sheldon, I’m sure there’s a pill for that.   (Eventually, you’ll come around)

Authors Note:  None of us – as closet “Sheldons” – came to shift our beliefs overnight.  We had to be shown, over and over – throwing away what we thought we knew – before our own (new) experiences & realizations & insights –  forced a hard reset.

Our Dr. Kam freely offers (paraphrase) “hey, I thought this (conventional) way before too, but now I know the truth”.
.. and now, so do you.. if you choose.