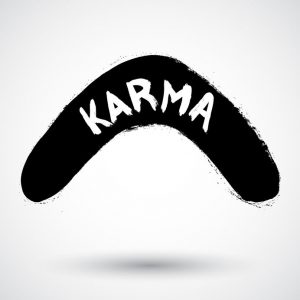 “ Karma is meant to be resolved.  It’s not meant to be re-lived. In a matter of seconds, you should know exactly what your karma is and you will not have that karma again. And the learning lessen people seem to want to find is – the resolving of these karmas without repeating the karmic experiences.”
– Dr. Kam Yuen, D.C. Yuen Method® Creator

A common western description of karma is: “what goes around comes around…” – like a boomerang –  or “cause and effect…”   Karmas can intensify – and accumulate energy – like any negative experience.

Karmas are often a primary – and mostly hidden – source of physical symptoms in our lives.

In Yuen Method®, karma is just another energetic weakness
to identify, strengthen and delete
on the spot

With all karmas, there is a victim (or victims) and a perpetrator.   A karma can be minor (lie, irritate someone, mislead them) or more severe (cause death, suffering).    There is no judgment of intention with a karma.  An unintentional karmic act committed is still a karma.

With Yuen Method®, we can resolve karmas easily by quickly identifying them with energetic testing.   And, of course,  just as important, we can identify when karma isn’t the major effect or influence.

When dealing with karma, there is no need to meet the person(s);  we can resolve karma through any time period or any layers of ancestors / descendants, or collective or cultural influences – in just seconds – and also check (the energy) that it is fully resolved.

The persons involved in the karmic act – whether victim(s) or perpetrator(s) – don’t need to be alive / incarnate – to clear their karmas – this is key.

There is no need for props, complex or hard-to-pronounce terminology, reciting verses, studying/reading of ancient texts, visiting with some guru … or change in your belief system (if you have one).    We just identify the karma(s) and resolve them – on-the-spot – and improve the situation immediately.

Karmic effects in our everyday lives

In our own experiences (now or past), our actions can create karmas or karmic energies.   Also, karmic effects can arise from our relatives (ancestors, descendants, spouses, siblings, in-laws) to us – whether these people are still alive – or not.   We can even sense effects of someone else’s karma from the environment (a particular room of a house, a city or town, etc)

“Creating good karma” or “good karma” are phrases used to describe behavior that is judged beneficial to others. Many believe doing good deeds creates some kind of karmic credit (vs karmic debt).    This may seem logical, and it’s a nice sentiment for how we should treat others…

But, energetically, there is no such thing as karmic credit.

Unfortunately, there is no notion of energetic currency in the universe where (general) karmic credits cancel out past (specific) karmic debts.   We cannot lessen, eliminate or “cancel out” a specific karma by performing a larger number of unspecific good deeds we believe or judge to be “good”.

However, benefiting others is a good thing in and of itself  – and indirectly, while helping others, we’re not creating any new karma to resolve.

If we steal Jim’s money, we don’t resolve that karma
by giving money away to 100 or 10,000 others
that weren’t the victims of the original theft
(though the 10,000 people might be grateful!)

The different types of karmas

Many systems discuss karma in the context of ancient beliefs, writings and terms from hundreds or thousands of years ago.

Yuen Method® redefines how we deal with karmas and karmic energy in a simple and direct way, grouping types of karma  based on the actual karmic acts and relating the victims and perpetrators.    That’s really all that’s needed.

The 3 different types of karmas:  (let’s keep it simple with one perpetrator (John), one victim (Mike))

There is also the less common notion of “karma of karma” which means we caused or influenced someone else to commit a karmic act.    In karmic terms, we do not sidestep a karma by proxy (someone else does it on our behalf).  We are still responsible – even if we unconsciously have influenced someone.

Identifying the general type of karma using energetic testing is how we begin to resolve it.

How to resolve karmas

By using energetic testing, energetic weaknesses that surface indicate the type of karma and who the karmic attachment comes from.    By identifying the type (direct, indirect, partial indirect), and with whom, we can strengthen the energy of the situation, resolve the karma and dissipate the karmic energy so the person feels a shift right away.

resolving karma this way means there is no need to:

We resolve the karma energetically with no judgment, conditions, blame or grudges held or need for this debt to continue to exist.     It’s as if – the karmic act – never happened.

This on-the-spot resolving of karma – upsets some who have themselves (or ancestor) grudge / blame energies – or believe in  “equal suffering” or revenge for a karmic act.

We have to remember, resolving the karma is more important than rationalizing some excuse (grudge) to hold on to it.
It’s this “need to hold on” energy – that either energizes/creates/attracts/perpetuates the manifestations of – mostly negative – events &  physical symptoms in our lives .. to continually remind us/our true self – “you need to resolve these/this karma(s)”.

When we energetically check and still sense a need for grudges, blame or conditions – we resolve/dissipate those energies as well – so the person(s) let go of these energies.   Then, both the victim(s) and perpetrator(s) can move on.

Resolving karmas in the normal course of life

“You have to deal with your karma.
But how do you deal with it?
Well, you have to recognize it,
or at least acknowledge that there’s such a thing as karma
and that you could actually resolve it.
The whole lesson in life is to have the insight to resolve karma.
And, if we can’t resolve that, then what’s the sense of being here?”
– Dr. Kam Yuen, D.C.

The Yuen Method® provides a more concise and simple way to identify and resolve karmas.  Karmas – especially current day ones – occasionally do get resolved in the normal course of our lives, but it’s hit-or-miss or not complete.    Without using energetic testing and Yuen Method®, most current day or past karmas (ours or inherited) would at best get resolved by accident,  not by design or through awareness or conscious process.

Belief in karma or karmic debt is not required to resolve the karma or curses (i.e. inherited karma or negative experiences to resolve).

Some key points about belief systems related to karma:

With Yuen Method®, we’re neutral and not limited by any belief system.   By using our insight, we reveal the karmic acts as they are – and resolve them – in all directions – and with all participants – quickly, and immediately change the energy of the situation.

When the karma is resolved, the energetic shift can be felt – on-the-spot.    For more information, see Karma – Part 2 – Outside Influences

To learn more about karmic influences on our daily lives and how to identify and resolve them using Yuen Method®,  schedule a consultation.